Learning to Change the Story

Earlier this year I spent two weeks on the west coast of the US. I travelled there to participate in the Advanced Story-based Strategy Practitioner’s Training run by smartMeme. The training was fantastic – I’ll be sharing what I learnt at Plan to Win workshops in the near future. 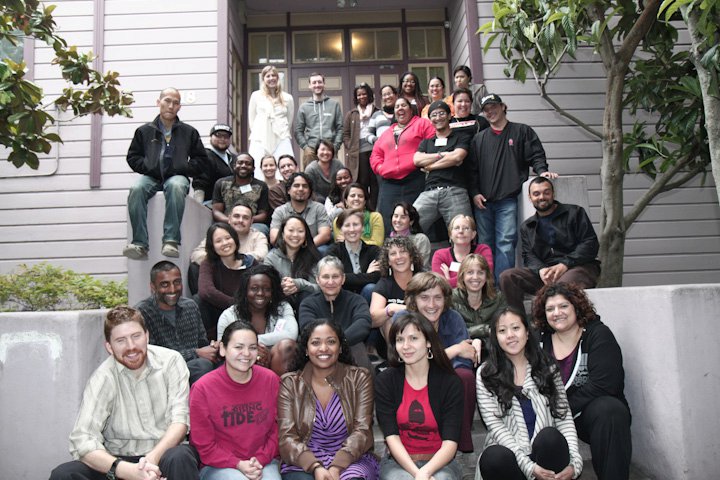 Alumni from the smartMeme workshop, June 2011. Photo by Ben Powless.

So what is story-based strategy?

A framework that links movement building with an analysis of narrative power and places storytelling at the center of social change strategy. The framework provides tools to craft more effective social change stories, challenge assumptions, intervene in prevailing cultural narratives, and change the story around an issue.  Glossary entry, Re:Imagining Change, Patrick Reinsborough and Doyle Canning.

One of the best things about the workshop was connecting with so many great people working on important struggles in their corners of the world. During the workshop we split into smaller groups to do practical work on four campaigns initiated by these networks:

In our small groups we applied the smartMeme story-based strategy tools to each campaign. This involved undertaking a narrative power analysis of the opponent’s story on each of the issues, and developing a campaign narrative with related actions and core messages (learn more about these tools at one of the upcoming workshops). Towards the end of the workshop each group presented to the others what they had come up with. The presentations were engaging and creative – one group even made a film (with sock puppets!), while another simulated a public service announcement, and another kicked off with dancing. It was a great way to learn about story-based strategy, as well as the key issues in each campaign.

During breaks in the workshop participants also shared on other issues – such as the campaign to stop the horrific Northern Alberta tar sands, and the campaign to expose and end brutality on US-Mexico border.

As a visitor from Australia this workshop was rich with learning on many levels. It helped me feel connected to a community of activists on the other side of the world. Social networking is helping those connections continue, and I value the updates that keep coming through my newsfeed about the lives and collective struggles of the good folks I met.

Many thanks to Doyle Canning and Patrick Reinsborough of smartMeme for building the important work of story-based strategy, and inviting in others to practice and spread these powerful tools. Their commitment to resourcing people in frontline communities is inspiring – and played a big part in creating such powerful and effective training workshop.

Watch this space for notice of Story-based Strategy workshops to be held in Australia – or get in touch if you would like to organise one for your group. The companion book, Re:Imagining Change by Patrick Reinsborough and Doyle Canning will be available for sale at workshops.