On the 7th September I participated in the One Day Wonder held at Abbotsford Convent. The One Day Wonder is a learning event created by, with and for facilitators and community engagement practitioners, or anyone who organises group meetings. Participants came from a broad range of contexts, with many involved in the Victorian Facilitation Network and International Association for Public Participation. 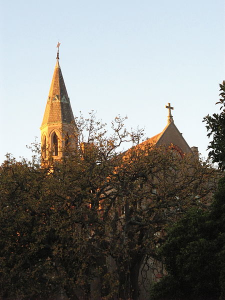 I sometimes feel a bit frustrated at conferences by how little attention gets paid to forming the group, breaking the ice and maintaining energy levels. So it was refreshing to have an event created by people with a similar understanding of group life, and a willingness to be creative in exploring it.

Ambient Orchestras provided the opening and closing of the day. Participants were encouraged to play instruments and contribute lyrics to a song we all sang together. It was a great way to give a large group a shared creative experience in a surprisingly short time. The midday energiser was laughter yoga led by Jim Lord.

The One Day Wonder program was made up of three sessions of three concurrent workshops.

I attended Marie Dumais’ introduction to the Peer Spirit Circle approach to holding groups. Marie provided an introduction to the elements of the approach, and then convened a circle comprised of half of the workshop group for reflection on the challenge to perform work duties well, be present in a family, and also nurture ourselves. The circle method seemed to promote increasingly deep reflection. After closing the circle the debrief allowed those who participated in the circle to share their experience, as well as observations from those on the outside of the ‘fishbowl’.

I also attended  Lindy Amos and Kris Wilms’ workshop ‘Drawing on the unconscious … making and taking the Facilitator role’. The workshop explored role theory in terms of the role we play as facilitators as groups. We each drew a picture to represent our experience of facilitation, and then shared these in small groups. Others were invited to share their impressions and interpretations of the pictures. This was a rich, and fun, way to unpack values and assumptions about facilitation.

I ran a workshop titled Facilitators… and Activists? Roles facilitators can play in changing the world. The main focus of the workshop was sharing ideas about how change comes about. To do this, I drew on an activity called ‘mechanisms of change’. I learnt this activity from Tash Verco, an activist educator who was active in the Australian Student Environment Network and developed a Theories of Change workshop based on content from the Resource Manual for a Living Revolution. ASEN regularly uses theories of change workshops at its training camp and Students of Sustainability conference.

The mechanisms of change activity posits the following approaches to social change:

Participants identified the ‘mechanisms’ which resonated most for them, and we had a discussion to clarify what each of the approaches could involve. We then looked at where people had experience of facilitation in relation to social change. I was the only facilitator in the room who explicitly focuses on working with activist groups – so it wasn’t surprising to notice that I was the only one with experience facilitating groups who were working to confront powerholders or engage in electoral organising (ie ‘becoming the powerholders’).

I believe facilitation skills can make a significant difference to the effectiveness of groups working for social and ecological justice. I feel very fortunate to be in a position to offer those skills, and I always encourage facilitators who have a social change passion to consider how they could contribute. If that’s you, please get in touch!

The One Day Wonder was a fun and productive day with the opportunity to experience a range of facilitation styles. The highly experiential nature of the day made it really rich with learning, and made me feel part of an impressive community of practice in Melbourne. It was also a great model for other learning events. Many thanks to the organisers and all the folks who contributed. Looking forward to next year!