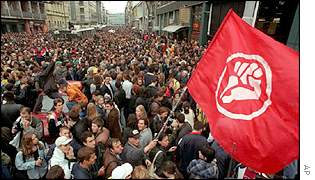 Feeling stuck in your social change work? Need some inspiration from the history of social movements? These three excellent online resources have got what you need. All three are concerned with cataloguing examples of nonviolent action and sharing those to support the work of people struggling for change now.

What is meant by ‘nonviolent action’?

Here’s what wikipedia has to say:

Nonviolent resistance (or nonviolent action) is the practice of achieving socio-political goals through symbolic protests, civil disobedience, economic or political noncooperation, and other methods, without using violence.

or a more poetic definition from Waging Nonviolence…

We consider nonviolence to be an active struggle for peace and justice by the only means worthy of the goal. It rejects the use of force that injures an opponent physically, mentally, or spiritually because, as Martin Luther King, Jr. wrote shortly before his death, “Returning violence for violence multiplies violence, adding deeper darkness to a night already devoid of stars. Darkness cannot drive out darkness: only light can do that.”

For more definitions and terminology see the Nonviolent Action Dictionary on Canvasopedia.

The recently launched Global Nonviolent Action Database provides free access to information about hundreds of cases of nonviolent action for learning and for citizen action. The cases are drawn from all continents and most countries, throughout history – the earliest case is from Egypt 12th Century BC, and there are a number of cases from the ‘Arab Awakening’ of this year.

George Lakey talks about the origins of the database and its hoped-for applications:

The database is organised in issue clusters, so you can search for cases relevant to your interests. Each case is tagged in terms of the type of nonviolent action involved: change, defence, and third-party nonviolent intervention. You can also browse ‘waves’ of campaigns, where there are multiple cases such as the US Civil Rights movement or the Soviet Bloc independence campaigns. 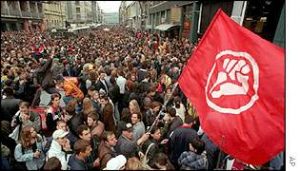 One of the most impressive cases of nonviolent action is the Otpor movement to bring down the rule of Slobodan Milosevic in Serbia. The disciplined campaign of strategic nonviolence, culminating in a general strike, ended a dark period of police brutality, political repression and electoral fraud. ‘The Year Life Won in Serbia’ provides an excellent overview of the campaign.

One of the legacies of this amazing campaign was the formation of the Centre for Applied Nonviolent Action and Strategies, CANVAS, committed to supporting ‘nonviolent democratic movements through transfer of knowledge on strategies and tactics of nonviolent struggle’.

The Canvasopedia is an online multimedia library including numerous videos from hotspots around the world, articles, and campaign case studies. Like the Global Nonviolent Database Canvasopedia divides cases according into three elements of nonviolent struggle: in this case, protest and persuasion; noncooperation; and nonviolent intervention. Each method includes links to a number of examples of relevant tactics.

New Tactics in Human Rights aims to empower social change advocates with knowledge, innovation and community. This global project shares details of innovative tactics which can be adapted to local challenges. The comprehensive list of tactics is divided into categories of protection, restoration, intervention, and building human rights cultures and institutions.

Beyond documenting and sharing information, New Tactics provides opportunities for communication and community building. Their Dialogues involve feature practitioners from around the world leading discussions on a wide range of issues. Anyone with internet access can then join a dialogue, asking questions and offering their own insights. Last year I participated in a New Tactics dialogue on Self-Care for Activists. Past dialogues are retained on the site as an ongoing resource.

Each of these projects provides practical resources, as well as abundant inspiration. The history of social movements is constantly being rewritten and undermined by those with an interest in downplaying people power. It’s incredibly valuable to have access to these stories, to know what people have tried, what they have learnt, and where they have succeeded and failed.

None of these websites is static – they will continue to expand, and they seek input of case studies, videos, and comments. What do you have to share?