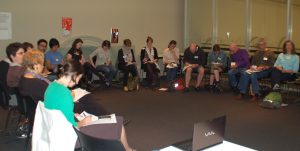 The Melbourne Campaigners’ Network got off to a great start last Thursday with the first gathering attracting a diverse group of over twenty activists, campaigners and organisers.

Story-Based Strategy — A framework that links movement building with an analysis of narrative power and places storytelling at the centre of social change strategy. The framework provides tools to craft more effective social change stories, challenge assumptions, intervene in prevailing cultural narratives, and change the story around an issue. 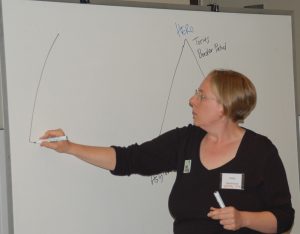 We talked about the difference between truth and meaning. Activists often put a lot of emphasis on gathering facts, data, and evidence for their positions. There’s value in this, but we can overlook the barriers to people understanding the information we distribute. We assume that because something is factually true it will have meaning for people. Actually, if a story is meaningful to people, they will believe it to be true. The pre-existing narratives through which people understand the world will shape whether they believe our messages. Campaigning that uses the power of narrative develops compelling stories which, although they may challenge underlying assumptions, are accessible to people and can be understood.

Looking at how the other side of politics engages with story can be illuminating. Here’s one picture worth a thousand words.

This anti-carbon tax protester manages to evoke Pinocchio (the more you lie, the longer your nose will grow) as well as witchcraft (a persistent cultural story about untrustworthy women) and schoolyard morality (liar, liar, pants on fire). The Juliar meme, first coined on shock-jock radio, has spread virally and has become part of the story about the Prime Minister, such that there is very little analysis or debate about whether she actually lied or not. A recent article by Peter Lewis on The Drum unpacks the ‘Juliar phenomenon’.

Meme — A unit of self-replicating cultural information (i.e. idea, slogan, melody, ritual, symbol) that spreads virally from imagination to imagination and generation to generation. SmartMeme defines a meme as a container, capsule, or carrier for a story to spread.

I’ve come across some resistance from progressives when it comes to strategic use of communications. I think this comes in part from a dislike of ‘spin’ and the dishonest practices of those on the right-wing. Story-based strategy is not about lying – it is about reducing the barriers to communication, and growing political opportunity in the narrative sphere. If the right keeps coming up with ‘capsules’ to spread their story virally, while we rely on long reports and media statements which use complicated scientific language, we allow them to have it all their own way.

Frame — The larger story that shapes understanding of information, experiences, and messages; the structure and boundaries of a narrative that defines point of view and power. Frames operate as pre-existing narrative lenses in our minds.

Over dinner afterwards a few of us starting to discuss the question ‘Who is doing this well?’  That is, who is using story-based strategy approaches which:

Here are some of the examples we came up with over dinner, and subsequently.

See Doyle Canning and Patrick Reinsborough’s Re:Imagining Change book, available from Plan to Win, for more comprehensive case studies of how campaigns have intervened to change the story. Got more examples? Please share!

Where to from here?

This session at the Melbourne Campaigners’ Network offered a brief introduction to story-based strategy. If you would like to talk more about how the story-based strategy approach and planning tools can improve the effectiveness of your campaign, get in touch. A public workshop with diverse participation is planned for the new year, but campaign-specific workshops can also be organised.

The Melbourne Campaigners’ Network is back on Wednesday 2 November. Tim Norton, Oxfam Australia Digital Campaigns Coordinator, will present ‘Taking a Campaign Online’. The session will outline how to choose your target and which digitals tools most effectively engage your supporters and achieve your aims. Register here.

Thanks to everyone who helped out on the night, and contributed to such an interesting discussion. See you next time!