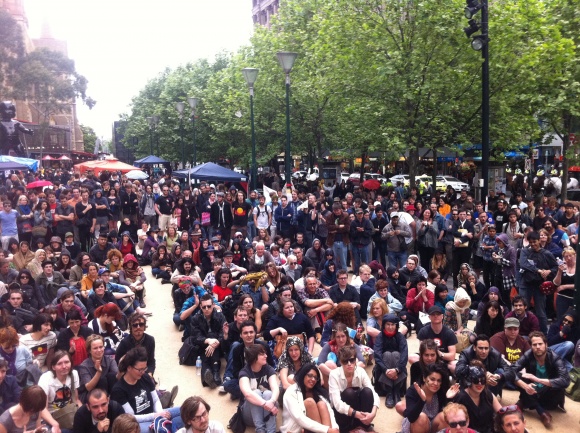 It’s hard to believe it’s only been a fortnight since Occupy Melbourne first kicked off. On the 15th October, as part of a global day of action in solidarity with Occupy Wall Street, Occupy Melbourne started at City Square. People gathered, working groups met, workshops were held, information stalls, a library, and a functioning kitchen were set up. Multiple tents went up and estimates of 100 – 150 people camped out. Less than a week later, under the direction of the Lord Mayor, police moved in and ‘evicted’ the occupiers.

Of course, that’s not the end of it. Occupy Melbourne, like similar occupations around the world, continues. The form of the actual ‘occupation’ changes, but a commitment to direct democracy is constant.

Many people are having their first taste of direct democracy and ‘consensus building’ through the General Assembly at Occupy Melbourne. People completely new to facilitation are stepping up to try it out. Experienced facilitators are being challenged by a different process, large groups, and a fair amount of chaos! A lot of learning is going on, in a dynamic and at times very difficult context.

For a gathering to go well we need to be clear on its purpose. The purpose of the Occupy Melbourne General Assembly is to:

The General Assembly is not the only forum to address these purposes. For example:

It is significant that the General Assembly is the time when everybody comes together to focus on Occupy Melbourne. This makes the time precious and also pressured. A lot of people want to get a lot out of the General Assembly, and the facilitation team needs to work hard to juggle those demands.

What participants are looking for

However clear the facilitation team may be about the purpose of the General Assembly, individuals rock up with their own expectations and needs. These may include wanting to:

Training for Change, US activist educators, talk about the need to have a strong ‘container’ in order to have a well functioning group where people can take risks and engage in rigorous group work. A container is strengthened by building relationships in the group, providing opportunities for people to show themselves (disclosing at their own pace), and having the safety net of a well structured workshop or meeting.

container: a word for the degree of safety the participants are experiencing. A workshop starts with a weak container – not much safety – so participants are concerned about how others see them and have less attention for learning. The stronger the container, the more participants become authentic and take risks to learn.  From the Training for Change glossary

It would be hard to find a more challenging context for building a group’s container than a General Assembly! So far they’ve been held in City Square, outside the library, from the back of a truck in Lygon St – all with significant background noise, people coming and going, a constantly changing group with different levels of involvement and understanding of the process, rain, acoustic problems with megaphones, time pressures, with police looking on!

Given these challenges, what are some things facilitators and participants can do to build the container at Occupy Melbourne?

This splitting of the role means that each person gets to focus on their aspect of the process – but also means that clear communication between roles is essential. Folks making up the facilitation team need to know each other in advance – through participating in the facilitation working group, and talking through the roles together. It helps if people who are stepping in to a role for the first time are able to talk with people who have done it before. Practising through a realistic role-play helps.

There has been some pressure from participants to vary who makes up the facilitation team. This is useful for skillsharing and making different people visible, but it should also be noted that it tends to take some practice to get into the rhythm of each role and the overall process, and having experienced members of the facilitation team is beneficial to the whole Assembly.

Setting the tone and modelling norms

The Moderator, as the most visible member of the facilitation team and constant presence throughout the Assembly, plays an important role in setting the tone for the Assembly. What does this mean?

The other members of the facilitation team also need to model the norms of the gathering – sticking to the process, being respectful, staying calm. Inconsistencies between different roles in the team will confuse people, create frustration, and potentially lead people to view the team as biased.

Being present means being focused in the here and now – not thinking too far ahead, and not being side-tracked or knocked off balance by something that happened in the past.

When all around seems to be chaos how do we stay grounded as facilitators?

When we stand up in front of a group of people to facilitate we can push people’s buttons around authority. Before we even open our mouths we can become the magnet for various feelings and projections, reminding people of experiences from their past with authority figures such as parents, teachers, or politicians. The likelihood that you may be viewed negatively increases in a crowd where a large proportion of people have anti-authoritarian politics.

How do we deal with this?

The process used at Occupy Melbourne has gone through minor revisions since the first General Assembly, and this will continue to happen. The current Assembly process isn’t the only one available to these kinds of large gatherings. One great example which is widespread in nonviolent direct action mobilisations, and has been honed by the climate movement in recent years, is the spokescouncil. Check out some insightful reflections about facilitating spokescouncils by Tanya Newman, a social movement educator from Aotearoa.

This is an exciting time for people engaged in building social movements and promoting democratic group process. Please contribute what you figure out – your rich learnings can benefit people around the world who are organising for a better future.