Plan to Win has been asking around for recommended reading for campaigners, community organisers, and other activists. What books have you learnt from, been challenged by, found inspiring – and what would you recommend to others?

Here Louise Matthiesson reviews Deep Green Resistance – Strategy to save the planet by Lierre Kieth, Aric McBay, and Derrick Jensen. Readers may find this book controversial – please chime in with your own impressions. Stay tuned for more reviews, and feel free to contribute your own, long or short! 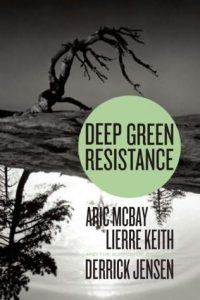 Ever get the feeling that our actions as activists – no matter how positive – pale into insignificance compared to the problems we face? That we’re fiddling as Rome burns? Rearranging deck-chairs on the Titanic, etc?

Well according to the authors of Deep Green Resistance you’re not just having a bad day, you are completely right. Instead of heeding the advice of well-meaning friends to “look on the bright side” you should trust that dark feeling and take a long had look at just how fucked up this civilisation is, then respond accordingly.

This is not a book for the novice environmentalist or the general public. It is targeted squarely at committed activists who are questioning mainstream environmentalism. In a nutshell the authors argue that “industrial civilisation is killing the planet”, it will never voluntarily reform and there is never going to be a mass democratic uprising to overthrow the system. Instead they put their hope in well-organised radical small groups of activists undertaking what they call ‘decisive ecological warfare’ (though the term is defined broadly and doesn’t necessarily entail violence). They draw extensively on the history and strategies of militant resistance movements worldwide, from the French resistance in WW2 to the IRA, indigenous groups and the modern-day Movement for the Emancipation of the Niger Delta. These examples remind us that most fights for truth and justice involve substantial, painful, personal sacrifice, and that is also what Deep Green Resistance asks of us.

I enjoyed this book not because I think we should all go out and buy guns to defend wild nature, but because reading it felt like a blast of harsh truth, and that was disturbing but invigorating. As activists we are constantly bombarded with messages telling us to tone it down, don’t upset people, and be ‘realistic’. Deep Green Resistance is a liberating antidote to all that. It reassures you that you are not over-reacting when you imagine bleak scenarios for the future, nor are you mad for thinking the whole basis of our civilisation is insane. Then it offers tools, advice and paths of action commensurate to the dire situation we find ourselves in.

“Decisive ecological warfare has only one goal at the heart of its strategy: to disrupt and dismantle industrial civilisation and thereby remove the ability of the powerful to exploit the powerless and to destroy the planet.”

Deep Green Resistance is a call to arms – literally – and it would be easy to focus on the fact that it accepts violence against property and even people as a legitimate tactic that may sometimes be necessary to fight destructive companies and infrastructure. This is indeed heretical, but even if you reject any use of violence this book has much else to offer. It is clear the authors wrestle with the moral dilemmas their approach entails, and they include many cautions against macho warmongering or misguided violent outbursts.

A strength of Deep Green Resistance is that despite its hard-core message, the authors are surprisingly ecumenical, emphasising the need for a plurality of tactics and embracing different viewpoints. For example, they praise many of the teachings of Gene Sharp, a leader of the non-violence movement. Nonetheless, they do take a whack at small ‘l’ liberals and anyone who thinks sustainability is the answer. More controversially, the book rejects vegetarianism and mocks the idea of a smooth transition to renewable energy.

Deep Green Resistance is also very practical, offering specific advice and direction for creating effective above and below ground organisations. The distinction between above ground (public, open, nonviolent) and below ground groups (secret, closed, may use violence) is a useful one that has deep ramifications for group structure and strategy. Chapters like “target selection” and “security” go further than your average activist how-to manual.

On the downside, the authors could have done with a more rigorous editor. In places it is over-long and self-indulgent, and shortening the heavy tome would have made it attractive to more readers. However, it is easy to dip in and out of the chapters that most interest you.

Aric McBay, Lierre Kieth and Derrick Jensen don’t have all the answers, and some of their arguments are flawed, but all kudos to them for having the courage to rip down the comforting illusions we rely on to function normally in an utterly messed up world. You will probably find much to disagree with in Deep Green Resistance but read it to be challenged and re-think your own values and priorities.

Louise Matthiesson currently lives by the beach in the northern rivers region of NSW. Louise has participated in campaigns over land-clearing, old-growth logging, dams, and climate change. She has also worked as a journalist and science-communicator.