Simon Copland reviews Rules for Radicals by Saul Alinsky, the classic text on community organising. This is another review in our series on recommended reading for campaigners, community organisers, and other activists. What books have you learnt from, been challenged by, and found inspiring? What books have informed your activist practices?  Share your recommendations and reviews.

Rules for Radicals: A Pragmatic Primer for Realistic Radicals, by Saul Alinsky, is essential reading for any radical who wants to create real change in the world. The book contains Alinsky’s codification of the ‘organising model’ of community change, and is generally considered the key text in the development of community organising. Rules for Radicals was published in 1971 and Alinsky drew on his experiences as a community organiser working with poorer and African American communities throughout the United States from the 1930s.

Alinsky covers a range of topics in Rules for Radicals, including discussions on the purpose of radical movements, ‘means and ends’ in campaigning, choosing issues to organise around, selecting targets, getting campaigns going, developing tactics, and communication strategies.

In developing this model, Alinsky develops what he calls a ‘pragmatic primer for realistic radicals’. It is designed to allow radicals to know “the difference between being a realistic radical and being a rhetorical radical”. Throughout the text he looks at pragmatic ways organisations and radicals can work to create change. For example, when discussing tactics he suggests:

“For an elementary illustration of tactics, take parts of your face as the point of reference; your eyes, your ears and your nose. First the eyes; if you have organised a vast, mass-based people’s organisation, you can parade it visibly before the enemy and openly show your power. Second the ears; if your organisation is small in numbers, then do what Gideon did: conceal the members in the dark but raise a din and clamor that will make the listener believe that your organisation numbers many more than it does. Third, the nose; if your organisation is too tiny even for noise, stink up the place.” 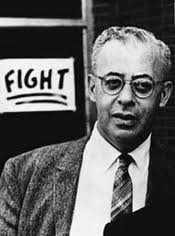 Using this practical basis, Alinsky outlines the realistic ways organisations can develop campaigns. One of the most interesting areas in this discussion is his work on how radical organisations can justify means in order to achieve their ends. When discussing means and ends, Alinsky states:

In other words, Alinsky argues that there are no clear lines for defining what ‘justifiable means’ are, but rather that justification is dependent on the context of the campaign and issue. This is particularly relevant given the power structures in our society, where those who are fighting for change (who are often the ones who get caught up in discussions about the ethics of means and ends) are fighting against people with a large amount of power who often have little care about the ethics of their means. Alinsky therefore states that:

“The practical revolutionary will understand Goethe’s “conscience is the virtue of observers and not of agents of action”; in action, one does not always enjoy the luxury of a decision that is consistent both with one’s individual conscience and the good of mankind (sic). The choice must always be for the latter.”

Alinsky develops this idea further by outlining a range of rules for how organisations can determine the ethics of their means and ends. Two key rules are:

The discussion on means and ends is just one area where Alinsky challenges much of the dominant discourse around movements for change. Throughout his work, Alinsky argues that much of our strategic decisions about ethics are made out of context, and that this is not a practical way to achieve change. And this is what is so important about his work. In many ways Alinsky’s work is an analysis of flawed approaches to social change (even today) and a call out for change. The great thing is that he also provides realistic, radicals ways for this to be achieved.

Alinsky’s Rules for Radicals is an essential work for any realistic radical. If you are working to create change in your community, make sure you get a copy. 5 stars!

Simon Copland works and studies in science communication at the ANU. Simon has worked in environmental campaigns at University and been active in the ACT Greens since 2007. He is also a committed unionist and queer activist and the political editor for the ACT based queer magazine, FUSE.