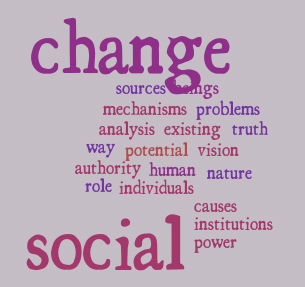 Our last Melbourne Campaigners’ Network was on Theories of Change, ably facilitated by Naomi Blackburn.

The topic was a great discussion starter, very relevant to anybody seeking to make change in the world. It was especially good to see folks from a mix of backgrounds and social movements engaging in the material – lots of healthy diversity as well as common ground.

The workshop drew on the Resource Manual for a Living Revolution (a key resource for the Movement for a New Society in the US in the1970s) and workshop curriculum developed by activist educator Tash Verco and adapted through regular use in the Australian Student Environment Network.

The Resource Manual defines the following elements of a theory of change:

To develop your own theory of change reflect on the beliefs you hold and assumptions you have about each of these elements. Asking questions about these in your group, organisation and campaign would be a good way to make explicit your shared theory of change – or highlight significant schisms to explore.

In the workshop Naomi predominantly focused on the nature and sources of power, the role of individuals and institutions, and the mechanisms of change. The ‘mechanisms’ are the various techniques used by people to make change. To explore mechanisms of change Naomi used an activity using the following mechanisms as listed in the Resource Manual:

The activity sparked a lot of discussion, with many people believing multiple mechanisms were required for change, but potentially at different times, or pursued by different players in movements. I found it a useful lens for considering recent or current campaigns, to consider which mechanism of change they utilise.

It was clear from the workshop that this is a topic which would benefit from further exploration. We may do that through future Melbourne Campaigners’ Network sessions, for example one on Bill Moyer’s Movement Action Plan, or longer workshops. Spending time exploring theories of change is beneficial for groups – get in touch if you’d like to organise a workshop customised for your group’s needs.

Interested in this topic? Have a look at the earlier posts Frameworks for Winning Change and Review: The Activists Handbook and check out Resource Manual for a Living Revolution, Coover, Deacon, Esser, & Moore, (1978) New Society Publishers, Philadelphia.