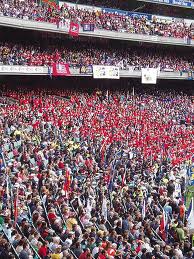 June’s Melbourne Campaigners’ Network focused on building strong attendance at rallies and other actions. There was participation from a diverse group of campaigners – an even split between workers’ rights, social justice and environmental/animal rights activists.

The session kicked off with an activity to share successes, failures and lessons in the area of turn-out. This was followed by some great story-telling by Cindy O’Connor about the Your Rights at Work campaign (2005-2007). Cindy, currently an AMWU organiser, was a YRAW community campaigner in Tasmania. If you need a reminder of the kinds of activities YRAW built around the country, check out this video (Warning: folk music!)

Here are some of the tips for building turn-out that came out of the session:

See also Victoria McKenzie-McHarg’s tips for turnout – and share your own below. See you at the next MCN – Future of Media, 6pm-8pm, Thursday 9 August.