Celebrating the 1st year of PTW

I launched Plan to Win in August 2011 with big ideas, minimal resources, and not a lot of precedent. It’s been a big year of personal learning while I’ve established this new project and I really hope others have found it beneficial too!

I thought it would be good to look back over what’s been achieved and share a little more about the motivation for this project.

Phew, lucky I chose activist education over a career in cake decoration.

Plan to Win is a project based on some assumptions:

Plan to Win puts resources, time and effort into supporting social movements – to assist individuals, groups and campaigns to develop the skills and clarity required to win change in the world.

plan
Noun: A detailed proposal for doing or achieving something
Verb: Decide on and arrange in advance

I knew when I came up with the title ‘Plan to Win’ that some activists might find it challenging.

Many activists have a philosophical or ideological resistance to conflict, competition, identifying opponents and ‘beating’ them. Some people see social change as a long process of multiple activities that eventually add up to changes that can’t be measured. Some place value on actions in and of themselves, regardless of the impact. Some people feel hopeless about the future but act out of a moral imperative. Maybe ‘winning’ has a corporate feel for some people, or reminds them of Charlie Sheen, and they’d rather avoid that.

It is not my intention to dismiss or ridicule these perspectives, but it is true that Plan to Win’s work is informed by a different one.

At this point in human history it is crucially important that we shift the balance in the direction of the interests of the majority of people and the environment, away from corporate, oppressive and exploitative interests. The conflict between these interests is real. We shift the balance by winning. Small wins, big wins, multiples wins – more winning by us, more losing by them.

What would it take to win? What kind of social movements will build enough power to shift the balance?

Plan to Win is one small part of supporting the development of those movements. 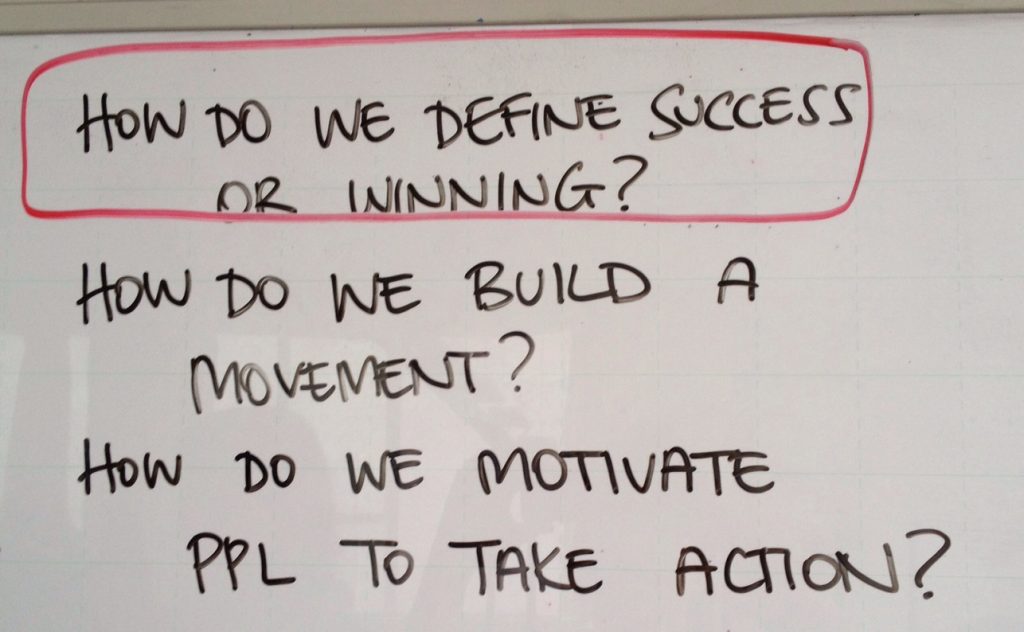 All the big questions, all of the time.

What’s happened in the first year?

This first year has been a lot about getting established and building relationships.

Some of the groups Plan to Win has worked with in the first year:

Some of the events Plan to Win has been part of:

To find out more read the workshop reports and reflections on facilitation on the blog.

PTW couldn’t have done it without you!

It’s PTW’s birthday – but you get the present!

Mentoring provides a confidential space to reflect on challenges you face, build on your strengths, and consolidate learning. You have someone with over twenty years experience in social movements on your side, supporting your thinking and contributing additional ideas and resources to replenish and equip you.

To book with this offer get in contact and wish PTW happy birthday! Of course, you can also book an initial meeting to explore how PTW can assist your group or campaign, free of charge.

Do you have a birthday message for Plan to Win?

Messages of support, feedback, or suggestions for future direction are all welcome!

Thanks again for an excellent first year – watch this space for updates on what’s next.

Holly Hammond
Founder and Director of Plan to Win