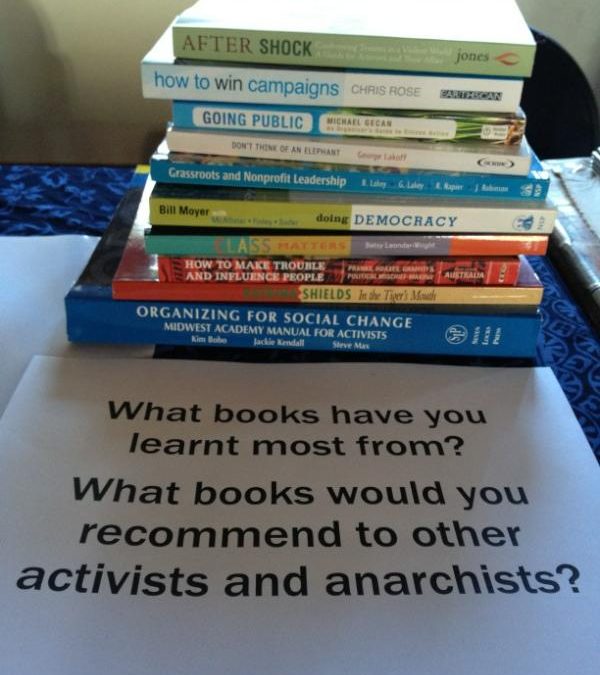 Plan to Win had a stall at the Melbourne Anarchist Bookfair on Saturday 4 August. It was a lovely day at the Abbotsford Convent, with a big crowd turning out and a bunch of activity. 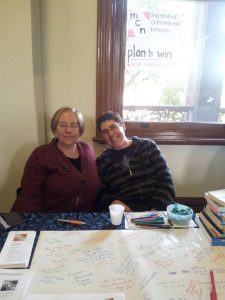 Last year I ran a workshop (see the follow up article Limits to Consensus?) but this year I really enjoyed just hanging out on the stall and chatting with folks.

In addition to selling some great books and chatting about activist training, we posed the questions:

‘Which books have you learnt the most from? Which books would you recommend to other activists and anarchists?’

Folks shared their recommendations on a sheet of butchers paper, and I shared them further afield on Twitter (and collected a few more that way too).

As a side-note – if you are organising stalls I recommend this approach. Having a relevant and participatory activity was a great way to engage folks in conversation, which flowed on to benefits in terms of growing PTW’s email list, promoting Melbourne Campaigners’ Network, letting people know about mentoring, finding out about training needs – and even selling the odd book.

Gathering people’s recommendations held some surprises – what, no Tyranny of Structurelessness? No anarchist heroes like Kropotkin or Bakunin or Bookchin? Some classics still got a mention though, as well as strong votes for science fiction by Kim Stanley Robinson and Ursula Le Guin.

Here’s some of the recommendations people came up with: 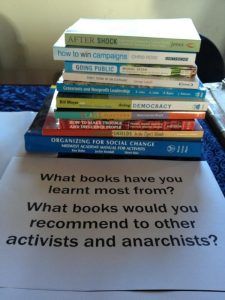 We did some show and tell on the stall with some favourite activist resources including:

And of course these excellent titles that we have for sale:

Many thanks to the organisers of the Melbourne Anarchist Bookfair for all your hard work putting on such an inclusive community building event.

Looking forward to next year!