It’s a little over one year since Occupy Melbourne kicked off in City Square, one year since the dramatic and traumatic eviction by police acting on behalf of the City of Melbourne.

It’s timely to look back on the phenomenon that was Occupy Melbourne. The Occupy Reflects Journal is a recently released collection of articles which does just that. The journal includes nineteen articles in the following sections: notes from the occupation; gender; personal reflections; and the aftermath.

Many appreciations to James Muldoon for pulling this together. He has taken on an important social movement support role as investigator, recorder, analyst and archivist. Here’s to making reflections and journals like this part of our practice, to capture lessons, share what’s in our hearts, and inform future struggle.

James writes in his introduction:

Like most truly novel historical events, the Occupy movement caught most people off guard. Politicians, the media and even hardened activists on the left initially dismissed the movement as an ephemeral and passing moment, a wave of energetic enthusiasm which would be as fleeting as it was exuberant. But Occupy persisted. As days turned into weeks and Occupy Melbourne remained a force to be reckoned with, people began to take notice of what was fast turning into a new social movement. And yet today, looking back, Occupy Melbourne sits awkwardly between the two categories, moment and movement, desperately attempting to escape the tagline of a “has been,” but with not quite enough energy and support to keep going.

I know I was caught off guard by Occupy Melbourne. My interactions with Occupy Melbourne confirmed many of my long-held beliefs: the value of planning and strategising; the importance of good process; and the need for training and development. But it also shook up some of my assumptions and challenged me. It reminded me that much in life can’t be planned for or anticipated, that sometimes a moment arrives which defies expectations, and that energy and emotions are core ingredients in social movements – sometimes unruly and unpredictable but utterly crucial.

Here’s what I contributed to the journal. On reflection, the title ‘It’s Easy to Light a Flame, Harder to Keep a Fire Burning’ isn’t quite right. Sometimes it’s really hard to light a flame – you keep rubbing sticks together but nothing sparks, there’s not enough oxygen or that blustery wind doesn’t help! But these are the words that came to me at the time of writing, so I share them with you here, and encourage you to download and read the rest of the journal. 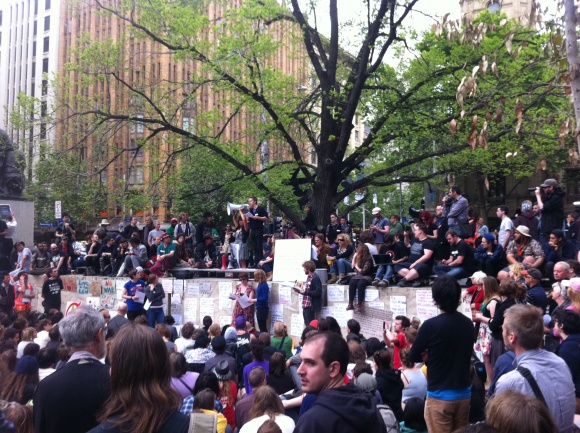 It’s easy to light a flame, harder to keep a fire burning

I offer facilitation, training and mentoring to assist individuals, groups and campaigns to develop the skills and clarity to win change in the world. I work all the time with activists who work diligently to get people along to events and rallies and often struggle to attract new members or supporters. That’s the everyday work of building movements.

The beginning of Occupy Melbourne was not like that everyday work. Suddenly hundreds of people popped up, seemingly from nowhere. Some had been active before, some were currently involved in activism, but very many had never been active before. The initial invitation to occupy City Square, following on from the example of occupation in Zucotti Park, New York City, was answered suddenly and emphatically. I’m always fascinated by what draws people to get active. What was so appealing about that initial invitation? How much did people turn up ready to take action, and how much was it curiosity and a ‘wait and see’ approach?

One thing about Occupy Melbourne in its initial days was that it was incredibly broad. The general gist seemed to be ‘something isn’t right’ and that was very inclusive; you just needed to agree that ‘something wasn’t right’, not necessarily what in particular wasn’t right, who was responsible (beyond the sloganized 1%) or what needed to be done about it. There has been a lot of criticism of the Occupy movement for not defining specific demands but in the early days at least that apparently allowed for large numbers of people to connect with it.

It also looked to me that people were drawn to Occupy Melbourne by the attempt to do activism differently. Perhaps Occupy Melbourne, and the other examples of the Occupy movement around the world, seemed different enough from ‘run-of-the-mill’ activism to initially avoid some of the usual stigma and disillusionment so people felt prepared to give it a try. In those early days Occupy Melbourne’s emphasis on creating an autonomous space in the centre of the city gave people a heady taste of ‘something different’ as an antidote to ‘something isn’t right’.

So that first week of Occupy Melbourne lit a flame of hope and engaged a lot of people. But where did all the people go? And how did so many people become so hopeless about Occupy Melbourne?

People experience a lot of barriers to getting and staying engaged in activism. Here are some of my observations of what may have got in the way of a sustained movement:

These, and a bunch of other factors, seemed to tip the balance for many people between the benefits of staying involved (like community and feeling like you’re making a difference) and the benefits of leaving (like escaping surveillance, putting energy into other social movement projects or just being dry and comfortable).

At some point in the future many people will emerge again, ready for action – excited, hopeful, complex, distracted and fickle people! Let’s figure out how to tip the balance in the direction of a sustained movement that can create the changes we crave.