“Humour is essential to a successful tactician, for the most potent weapons known to mankind are satire and ridicule.” 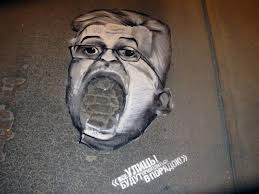 In January I was asked by New Tactics in Human Rights to be a conversation leader in their international online dialogue ‘Using Humour to Expose the Ridiculous’.

Many excellent tactics and stories were shared from around the world. Thanks to everyone who participated, including those who shared examples via Facebook.

New Tactics has just posted a summary of the conversation so I thought I’d share one of my comments… sorry it’s not funny.

What role can humour play in building community power and undermining the power of targets like politicians or corporate bosses? People power can take many forms – there are different ways we can work towards getting what we want. For example:

It stands to reason that if opportunities to exercise some types of power are limited, others become more valuable.

Cultural tactics can include undermining the public standing or reputation of power-holders. The consent theory of power is useful to consider here. This assumes that the functioning of a society, and the place of elites, depends on our consent. We agree to follow the rules, play our part as workers, consumers, voters etc, and generally go about things in an orderly way. If we withdraw consent through nonviolent direct action the system can be undermined and potentially topple over.

One aspect of consent is recognising the authority of elected leaders, public institutions, the police etc. Put simply, we take them seriously. Humour can play a very useful role in disrupting this. Humour, like political scandal, can cut through the veneer of public relations with an ‘Emperor’s New Clothes’ effect.

For more information about consent theory of power see The Role of Power in Nonviolent Struggle by Gene Sharp, and Brian Martin’s summary of Sharp’s approach.

Check out the rest of the conversation, and these great stories by Nicola Paris about the Fremantle Anti Nuclear Group.

Photo: This is from one of my all time favourite tactics. Russian activists painted the faces of politicians around large potholes in order to directly pressure them to fix the roads. This excellent youtube explains the successful action.

In Brisbane? You should definitely get along to the Humour and Political Activism workshop featuring Majken Jul Sørensen this Thursday 28 February. If you’re in Melbourne don’t fly to Brisbane for the workshop because you’ll miss the US Election Report-back!