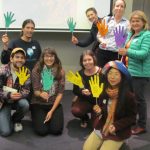 By now I’m sure you’ve heard the news – Woodside has pulled out of the proposed gas hub development at Walmadan (James Price Point in the Kimberley). The development may still be on the table in some shape or form, but for now this is an important victory for the No Gas campaign.

As Nicola commented on the CounterAct blog:

The financial media will all report that this was a commercial decision. Yes, in large part, of course it was – but to ignore the significant disruption, the investor uncertainty, the lack of social license and the risk, challenges and increased costs faced by the Joint Venture Partners by the consistent and varied resistance to this project is to ignore a political and economic reality faced by many contested projects these days. The community can rightly claim a stake in the ‘win’ of this project being deferred, delayed or cancelled. And a well fought one at that.

We didn’t know that news when we gathered for Lessons from the Frontline, April’s Melbourne Campaigners’ Network featuring a report-back from Nicola Paris.

Nicola shared inspiring stories from the campaign, some of which are included in her article The Heart of the Kimberley. Peter Robertson also offers some useful insights in How We Stopped James Price Point Gas Hub.

Nicola also encouraged us to consider the role nonviolent direct action can play in campaigns. In small groups we reflected on our experiences and shared what makes NVDA either effective or ineffective. Here’s a summary of what folks came up with. 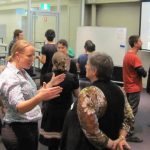 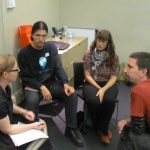 This is what we discussed on the night but of course there are many other factors which can render NVDA effective or ineffective. Learn from past experiences via these resources.

The No Gas campaign applies the following criteria to any NVDA actions that they undertake:

What kind of criteria have you come across for assessing potential tactics? Please share in the comments below. New Tactics in Human Rights has collated a range of resources for developing campaign strategy, including tactics assessment, here.

Many thanks to Nicola Paris for sharing what she learnt during six months supporting the No Gas campaign in the Kimberley. Keep in touch with Nicola’s exciting new project CounterAct, and check out her soon-to-be-released report on what motivates people to take arrestable action.

Next Melbourne Campaigners’ Network we’ll be Celebrating Success – just like the Broome community has been doing! We’ll share stories of recent Australian campaign wins and significant wins from social movement history. We’ll be looking at how campaigners can use stories and experiences of success to build momentum, maintain morale, attract active supporters, and motivate people to take action. Come along: 6pm, Thursday 30 May at Ross House.