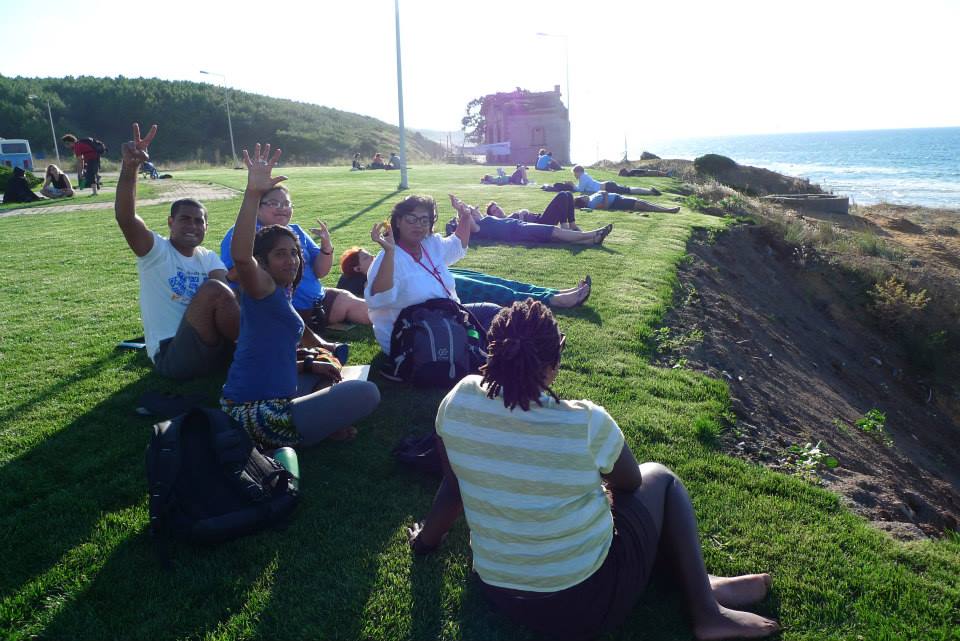 This June I had an amazing opportunity to be part of building the power and momentum of the global climate movement. I spent a fortnight in Istanbul working on 350.org’s Global Power Shift which gathered 500 climate activists from over 130 countries.

The fortnight really translated into months of preparation and a few weeks of recovery! It’s been a wild ride and a significant part of the work of Plan to Win this year, so I thought I’d share with you some of what happened. A little bit of show-and-tell of ‘What I Did on My Not-Holiday’.

The road to Istanbul 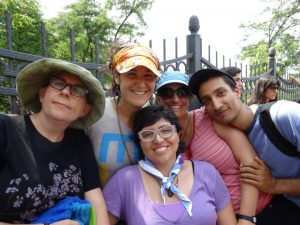 TfC buddies Holly, Celia, Andrea, Tanya and Daniel at the climate action at the end of GPS.

At the end of February I received an email from Training for Change inviting me to be part of an international team to deliver the Training of Trainers prior to Global Power Shift.

Training for Change plays an important part in my activist education journey. Reading about the Philadelphia based movement training organisation in 2005 directly contributed to my epiphany – the sudden clarity that I wanted my life’s work to be supporting the effectiveness of social movements.

After embarking on that work, with access to very few models of what that could actually mean, I decided I needed to build my skills and confidence. I completed the TfC Super T in Toronto in 2006 and also volunteered at the Philadelphia office. That training had a significant impact on my approach to activist education. I carry many of its lessons with me today.

So, an opportunity to work with TfC as a trainer? With an international team led by Daniel Hunter? In Istanbul? To contribute directly to the effectiveness of the global climate movement? My response: ‘Yes! I’m so there.’ 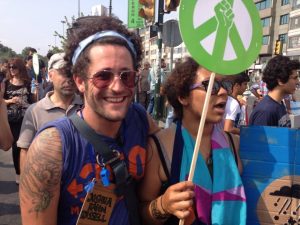 Joshua Kahn Russell and Deirdre Smith at the climate action on the last day of GPS.

That Yes led to another opportunity – to be a trainer at Global Power Shift itself.

I had a Skype conversation with Joshua Kahn Russell (GPS Program Manager and US Actions campaigner with 350 – including running the amazing NoKXL trainings) which gave me a deeper understanding of the hugeness of the whole thing. The scale of his job was intimidating – gathering 500 climate activists from over 130 countries for a week of training and strategising.

Joshua invited me to be the track leader for the Media and Communications track, which I’m also so glad I said yes to. It involved coordinating a team of 10 facilitators from a range of countries to develop and run workshops for around 90 participants. It would also mean being ‘on’ for the whole week and facilitating for part of most days. I immediately resolved to up my fitness regime so I would have enough stamina!

Many thanks to my awesome sauce Media and Communications facilitation team: Oleg Izyumenko (Sweden), Dipti Bhatnagar (Mozambique), Shadia Fayne Wood (US), Josephine Namakau Pumolo (Zambia), Fenton Lutunatabua (Fiji), Ana Perez (US), Christine Cordero (US), Heather Box (US), Kevin Smith (UK) and Anjali Appadurai (Canada). Each facilitator contributed so much to making our track go well. After weeks of tricky phone meetings (early morning London = middle of the night in Vancouver) and multiple Google docs our track had a solid draft to work on.

The planning for Global Power Shift had been going on for over a year before the occupation of Gezi Park sparked a national movement for freedom in Turkey.

Local Turkish GPS organisers were a part of the movement – working long hours to build a global climate convergence, then picking up their gas masks and joining their friends on the frontline. Some of the biggest police crackdowns happened just days before we started gathering for the Training for Trainers. Some facilitators booked in to hostels in Taksim but weren’t able to get back to collect their belongings for days.

In some ways it was the perfect level of chaos and upheaval to prepare us for catastrophic climate change. In fact it was an inspiring and motivating political backdrop. The sense of solidarity in the Turkish movement was uplifting, and there was so much creativity and ingenuity in the face of repression. I feel extremely lucky to have been there at that time.

How it rolled out

Here’s a summary of my trip to Istanbul.

I left Melbourne and flew to Istanbul via Singapore – around 24 hours from beginning to end.

I arrived in Istanbul at 7am and met up with my friend Tanya. We resolved to stay awake and have a gentle day of sight-seeing to help recover from jet lag. At 6pm we experienced unexpected tear gassing. That’s a whole other story – come along to MCN if you want to hear it. 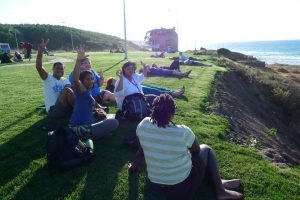 GPS facilitators kicking back by the Black Sea.

After a night filled with the sound of tear gas canisters being shot and scary Twitter reports of pro-government supporters attacking protesters nearby we decided to leave our accommodation. We travelled to the coastal university campus for the Training of Trainers. Swimming in the Black Sea was a welcome change of pace.

On Tuesday I prepared with the rest of the TfC’s facilitation team – Daniel Hunter (US), Celia Kutz (US), Apple Chan (China), Gerald Gomani (Zimbabwe), Joshua Kahn Russell (US), Andrea Parra (Colombia). We sat at a bench overlooking the Black Sea, got to know each other and worked through our schedule. My cofacilitator Ram Chandra Paudel (Nepal) arrived later that night.

On this day I also went for a long walk along the beach, twisted my ankle in a pot-hole on the road, and suffered a mild electric shock from a faulty light-switch. Gah! 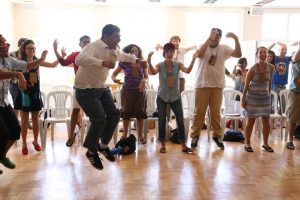 Ram energises at the T4T!

This three day training aimed to develop facilitation skills, increase cultural awareness, and prepare participants for Global Power Shift. It brought together about 90 people including GPS track facilitators, 350 field staff and volunteers. For half of each day we met in the whole group of 90 then split into groups of 20+ in the afternoon on the first two days, and in track groups on the final day.

I was so impressed by the caliber of my cofacilitators. It was especially amazing to see experiential education done so smoothly with such a large and diverse group. I’m proud of our team – many of us had never met before but we shared a common language and methodology due to our exposure to TfC.

Some of what was covered:

My track worked together on these two days, bonding as a team and refining our curriculum. I’m still amazed at how well we worked together given the lack of pre-existing relationships, our varied experience, and different cultural outlooks. Not to mention jet lag, hot weather and not enough protein in our cafeteria diets!

Joshua Kahn Russell and Navina Moon talked us all through the huge program for GPS and Sharon Lungo from the Ruckus Society led a beautiful closing ceremony overlooking the Black Sea.

We left behind the sea on Monday and headed to Istanbul Technical University to settle in for the week. That night there was a super energetic opening ceremony with each region sharing a song.

Ana and Holly facilitating at GPS.

One of the most moving and inspiring parts of GPS for me was hearing Pacific Islanders talk about the impact of climate change on their homes and communities. The emotional charge of these stories, combined with powerful cultural sharing through warrior dances and the relationships I formed with individuals, shifted me personally. Sea level rise will never again be an intellectual concept for me. See Josh Creaser’s story about how this affected him too, and watch the We Are Not Drowning: We Are Fighting video.

We kicked off the media and communications workshops on Tuesday with hot weather, minimal air circulation, and a little dose of chaos. It was excellent to get a look at our participants, who turned up with so much willingness to meet each other and learn.

Over the week we ran workshops on: 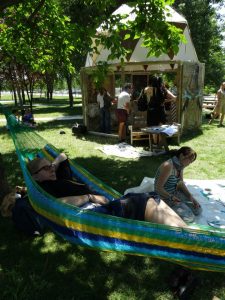 Hammock-based heatstroke recovery in the gorgeous creative space made at GPS.

Mid-week I succumbed to heatstroke from the heat, humidity and airlessness in our training rooms. I experienced extreme nostalgia for the Black Sea, or just a nice public pool in Australia where they don’t expect you to have a blood-test prior to swimming! While recuperating I missed some amazing panels, including on Indigenous organising, and resisting coal and gas around the world.

I spoke on a panel about ‘Sustaining the Movement’ and caring for ourselves. The session was facilitated by Daniel Hunter and Andrea Parra who demonstrated their skill in elicitive questions. It was so good to hear the perspectives of the other panelists, Fenton Lutunatabua and Gerald Gomani. Their interviews will be shared on the Plan to Thrive blog soon.

Friday was the final day of workshop tracks. Our track closed as it began, with each participant speaking in their heart language (first language). It was a sweet relief but it also felt like we had only touched the tip of the iceberg (which FYI would completely melt in those stinking hot lecture theatres).

Saturday was the closing ceremony of Global Power Shift. Each region shared posters of what they had planned over the week. It was incredibly inspiring to see all of this climate action about to happen in so many different places. Juan Carlos Soriano’s simple words from the closing stay with me: ‘We are a team’.

We then bussed off to join thousands of Turks to protest the massive expansion in coal-fired power stations in Turkey. It was such a joyful international march! This was somewhat dampened by the final rally being held in a cordoned off section with police (somewhat blasé) inspection of our bags when we entered. But hey, no tear gas!

All this was capped off with a boat trip on the Bosphorus which was one of the funnest parties I’ve ever been to, and certainly the most international. There were different sections of the party – like intense dancing led by the Brazilian delegation upstairs, or the more mellow constant singing downstairs led by folks from the Pacific Islands. 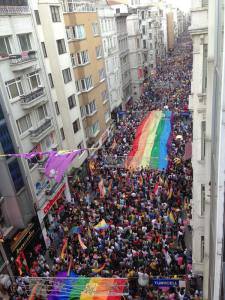 We held a facilitator’s debrief, which felt like hard mental work after clocking off the day before. It gave me a picture of the much larger event that had taken place, with the plenaries, panels, regional planning, and creative activities I had mostly missed due to being absorbed in my track.

There were sweet and sad goodbyes. International organising has many challenges but I think the hardest part for me was making strong connections with so many people that I may never see again, or only very rarely.

How do you finish a week like that? Be being part of a 50,000 strong crowd at Istanbul Pride, that’s how. Oh and dancing ecstatically in the rain to cheesy dance music.

The long trip home… to sleep and ponder and process and try to stop looking so blank when people say ‘How was your trip?’

To be honest I think I’m still processing the whole experience. There’s not a lot of analysis or deep reflection in this post, it felt like enough for now to just document what happened.

Global Power Shift was a big bold experiment and I commend 350.org for embarking on it. Much has been learnt, and much is to come. Phase 2 is going to be incredible!

Many thanks to my two amazing teams at GPS; to Training for Change and 350 for the opportunities they extended to me; to all the organisers, staff and volunteers for all their hard work; and to all the lovely friends I made, spread all over this splendid globe.

Want to know more? Melbourne campaigners are reporting back from Global Power Shift (including observations from the Turkish struggle) at Ross House, 6-8pm Thursday 25 July.

Thanks to Ben Powless and participants in the ‘Media Makers’ stream at GPS (facilitated by Shadia Fayne Wood and Josephine Namakau Pumulo) and other folks for photos on this page.