In November 2011 at Occupy London someone handed me a flyer to an anti-fracking demo, inviting me to meet the group the next day and travel with them to an industry meeting. The next day I met the anti-frackers at the appointed place, and as we boarded the Tube I started asking questions about their group and how their campaign against the relatively new British CSG industry was progressing. I know Londoners are famous for not being super friendly but it seemed obvious that no-one really wanted to talk to me.

After a few more questions, their reasons for caution was obvious – just one month earlier, the Guardian newspaper had revealed that UK police operated a network of spies infiltrating environmental, anti-racist and animal rights groups, with single deployments often lasting for years at a time. While UK movements have always had a healthy concern for police infiltrators, these cops were so deep undercover they almost always escaped detection. A new climate of caution was born. For UK activists everyone, including me, was under suspicion.

Undercover cops in Australia always seem relatively easy to spot – that closely cropped new person who seems awfully keen to ask, ‘are there plans for any violence?’ in a gauche and over enthusiastic way and then disappearing after a couple of meetings. But the UK police were ‘deep swimmers’ befriending activists, co-renting sharehouses, taking key roles in activist collectives and organising actions. One undercover even wrote part of the famous McLibel pamphlet while part of the anti-capitalist collective London Greenpeace (no relation to that other Greenpeace).

Undercover: The True Story of Britain’s Secret Police is a compelling and deeply disturbing book by the two Guardian journalists who broke the original story. It’s is written in a readable journalistic style – good for people like me who struggle with academic non-fiction. Don’t expect too much analysis of the whys and wherefores of the police state. Instead the book focuses on the personal stories of key operatives in the two police units, the Special Demonstration Service and the Nation Public Order Intelligence Unit, charged with monitoring activists. Much of the book focuses on the most controversial aspect of this undercover work: police having romantic relationships with women activists.

As I write this, the UK courts are set to hand down judgement in a case bought by the many women who unknowingly had relationships with undercover police. These relationships provided crucial cover and legitimacy for police spies and caused deep psychological damage to the women used in this way. And they were all women – with one exception all of the police spies in the SDS and the NPOIU were men. The one woman spy only had one casual sexual encounter. One case covered in detail in the book is ‘Megan,’ involved in Climate Camp, who had a relationship with an undercover agent for six years. At least two women had children with undercover spies who then disappeared from the child’s life after their deployment finished. 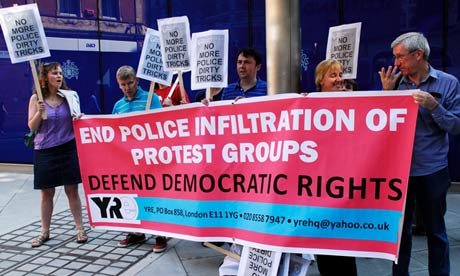 One question that I was left with at the end of the book was – from a policing perspective, what was it all for? With a few exceptions, protest actions proceeded as planned even where undercover agents knew about them. Undercover agents never gave evidence against activists in court as this would have blown their cover, and so the usual pattern for undercover agents of infiltration, evidence gathering, then arrest and testimony simply never occurred. One undercover officer spoke of his inside information being used to determine just exactly how many police horses and riot police would be needed for demonstrations he was involved in planning – but does this really justify the resources used to maintain undercover agents?

The most obvious answer to ‘what was it all for?’ is in the story of Pete Black who turned whistleblower on the SDS and was interviewed at length for Undercover. Between 1990 and 1997, a staggering 484 people died after contact with the London police. Pete Black was deployed to infiltrate the campaign against police violence, feeding information about the campaign right up to the police commissioner. Far from ‘subversive’, Black says, these campaigns had ‘at their heart families who had lost their loved ones and simply wanted justice. By targeting the groups, I was convinced that I was robbing them of the chance to ever find that justice.’ The information provided by Black enabled the police to plan their own strategies and defend their actions. Likewise when undercover in environmental campaigns police colluded with targeted corporate interests, allowing them to stay one step ahead.

When doing police liaison at a protest I have been told countless times by the police, ‘we support your right to protest, just within the limits of the law.’ The operations in Undercover reveal that statement for the falsity it is – police exist to defend the status quo even where there may be no ‘public order’ component, and will use any means necessary to do it.

According to the authors, both the SDS and the NPOIU have folded since being exposed in the media. Both units leave a legacy of damaged hearts and minds, on both sides, which will be played out in the courts for years to come. And beyond the immediate victims, all of us, in the UK and further afield are reminded what an impossible and courageous task social change work seems to be, and how many obstacles are put in our way. Without trust, social movements can’t function. New people must be constantly recruited and supported. If this undercover operation has resulted in eroding that sense of trust and openness, it may be a success for the SDS and the NPOIU they could never even have dreamed of.

Ellen Roberts is a environmental campaigner based in Queensland. She loves birds, gardening and carbohydrates and believes in the power of community organising.

If you’ve read a book that other activists will find useful please consider sharing a review via Plan to Win.