Community organising is a term that is being used more and more in Australian social movements – but what does it really mean? Here’s a brief introduction to some of the key principles. 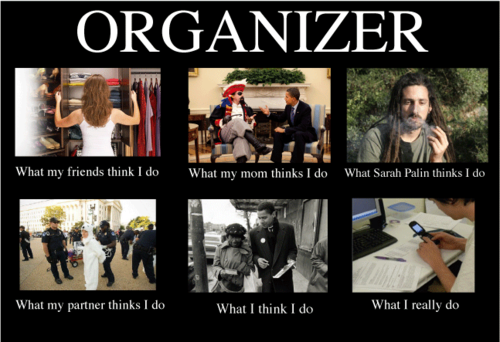 Community organising builds power through gathering people with shared interests to take collective action. This approach recognises that significant social change tends to come about through the coordinated action of a number of people, rather than by isolated individuals.

Organising aims to shift relationships of power. From this approach all negative impacts on a community can be understood as a result of a lack of power. For example, where workers are divided and do not act collectively through a union they tend to receive lower pay and poorer conditions.

Organising does not focus energy on educating a target (decision-maker) of the merits of a policy; organising aims to make adopting a particular position in the political interests of a target, by avoiding negative pressure and potentially winning support through the change.

As Frederick Douglass, 19th Century US civil rights activist wrote, ‘Power concedes nothing without a demand. It never did and it never will.’ So the challenge is not to convince Tony Abbott that climate change is real, but that failure to act on it will result in political repercussions.

Some of the characteristics of an organising approach to social change include:

Organising is a well-established approach to social change in the USA, with many paid community organisers who may move between different movements and community campaigns with a transferable skill-set. Saul Alinsky is considered the founder of modern community organising, and his book Rules for Radicals (published in 1971) continues to influence organising practice today.

In Australia organising is becoming increasingly apparent as an approach to social change, particularly in workplace organising (through the activities of many trade unions), electoral organising (for example Adam Bandt’s Melbourne campaign and the Independent for Indi campaign) and community issues campaigns (such as Your Rights at Work and 100% Renewables).

So that’s the basics covered. Want to take a deeper dive? Enrol in Organising to Win, Plan to Win’s 2018 course.

This article was first published in Green Magazine Issue 41: Summer 2013.