Anita Tang, Manager of the Policy & Advocacy Team at the Cancer Council NSW, reflects on meeting Daniel Hunter at the recent Sydney Campaigners’ Network event. She shares insights from his work which can contribute to strategic and soulful campaigning. 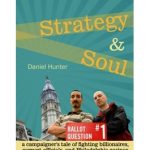 I read Strategy & Soul in 2013 and have been recommending it to everyone with an interest in campaigning and organising. The first person narrative gives the book immense power. You become immersed in the fight against casinos, while also having a birds-eye view of the campaign, and access to the insights of the author, Daniel Hunter, who never misses a teachable moment.

So when the chance came to meet Daniel in Sydney and to hear more of his insights from the campaign, I leapt at the opportunity!

The book itself is full of lessons, insights, and practical tips on almost every page – far too many to summarise. Listening to Daniel in Sydney though, helped crystallise 5 particular insights from his work. 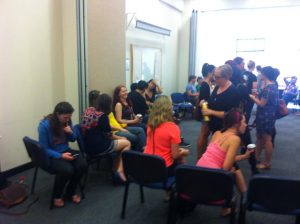 Being involved in an issue makes you more passionate about it

Daniel mentioned that until he became involved in the Philadelphia casino campaign, he would not have regarded himself as a strongly ‘anti-casino’ person. But working on the issue, hearing the stories of people affected, and learning more about casinos, provided the emotional and intellectual fuel for the fight.

I have found this to be true in my own experience as well. I had no particular reason to be passionate about running campaigns related to cancer. I had no personal ‘cancer story.’ But once I started talking to people about what needed fixing in the ‘cancer system’ and seeing how big industries were standing in the way of public health initiatives, I was fired up!

For me, this insight is a reminder that when looking for leaders and supporters for our campaigns, we shouldn’t just be looking for those already passionate about the issue. Many people are moved to act not because of the particulars of the issue, but because it reflects an injustice. It was a good reminder that there are values that people hold dear, and seeing those values violated will move people to action.

Find the values that will ground your campaign and engage people

Daniel and his team ran several discrete campaigns as part of the fight against casinos in Philadelphia. Although each was designed to create a wedge against the casinos, they were not explicitly anti-casino. The approach, as Daniel described it, was to find the ‘duh issues’ – the things that most people would agree with, even if they weren’t particularly anti-casino. Operation Transparency questioned the legitimacy of decisions already made about casino planning and approvals; and No Way without Our Say focused on giving citizens a voice in creating a buffer zone around casinos. These helped to frame around a position that people could support, while making it harder for the casino developments to progress.

This elegant approach led me to wonder about how people decide when to adopt this more intermediate approach, and when to move directly to the ultimate ask (eg “ban casinos now”). We could probably all benefit from a decision making guide or model that encourages groups to consider the value of the ‘duh issue’ approach when appropriate.

Using setbacks to move you forward

Reading Strategy and Soul was a bit like watching one of those dramatic thrillers where for every step forward, a new obstacle appeared – truly a roller-coaster. I think this is part of the appeal of the book: it is full of tension, and reflects the challenges of campaigning.

But rather than leaving us despondent and feeling beaten down, Daniel shows us how to use setbacks to move our issue forward and to build strength. Sure, we’d all prefer not to have any setbacks and losing moments, but since they are going to be there whether we want them or not, far better to deal with them with equanimity and use them strategically.

One thing that helps is to have language and processes that normalise them. When faced with a major blow to the campaign, one of his colleagues spoke about it as a ‘course correction point’ – a spot to take stock, refocus on the goal and find another way to get there.

Other important lessons included – providing your supporters with a mechanism to express collective outrage about the turn of events; making sure they hear the bad news from you not via the media (where it is likely to be framed by your opponents); and the chance to use setbacks to find new allies.

One great idea mentioned in Strategy and Soul involving eliciting people’s commitment to an “If (this happens), then (we will do this action).” This helps condition people about setbacks while also preparing for stronger action. Having people sign up the ‘if, then’ pledge means that a campaign can move quickly to action if the ‘that’ circumstance arising. And if the setback doesn’t happen, it has helped continue recruitment for the cause.

Decisions about campaign directions is balanced between leaders and members

One of the constant tensions in community organising is in the balance between making decisions efficiently while working in a distributed leadership model. Daniel pointed out that even with a small executive team making decisions about a campaign, it remains democratic because everyone involved can exercise the choice of being involved or not. So even with centralised decision making, it is the members and supporters that ultimately decide if any idea or an action will work.

One way to think about managing the balance between where leaders want to take the movement and where members are likely to be comfortable involves ‘pacing and leading’ – starting where people are comfortable (pacing) before helping people move outside of their comfort zones (leading) and preparing them to make the leap to more radical positions and actions.

I think this is a sobering reminder to those of us who are making decisions about campaign actions or timetables – that the ultimate test of our decisions will be in the field, and by those we are working with, and that if not careful, we may face the ultimate defeat at the hands of our own members.

Trying to stop casinos in Philadelphia was, in the opinion of many, an unwinnable fight. Certain processes had already been completed and people were talking about it as a ‘done deal’. Yet a group of concerned citizens took it on anyway. The campaign represents the importance of commitment before strategy (see also Ganz Why David Sometimes Wins). Once people make a commitment to do something, they find a way. People involved in advocacy (particularly those in more established NGOs) sometimes say that ‘feasibility’ should be one of the criteria for deciding what issues to pursue. Strategy and Soul is a great example of the opposite approach. First decide what is worth fighting for, and then find a way to do it, even if everyone around you is saying that it is not possible.

I think this sentiment was best captured by Amanda McKenzie on the afternoon, who reflected that Daniel’s story reminded us about “Not being held back by what people think is possible but focusing on what is needed”.

It is a little embarrassing to admit, but until hearing Daniel talk about the need to balance strategy and soul in campaigning, I had not really given a lot of thought to the title of the book! But it has made me think about the need to make sure that you balance your team with people who are strong in strategy with those who are strong in soul, and to be more open to the ‘wisdom style of strategy’ rather than thinking of strategy as a written document. There was also a very interesting snippet of a conversation about cultural diversity providing a better balance of strategy and soul, and implications for Australia where our campaigning efforts are not as culturally diverse. Hopefully there will be a chance to explore that discussion further!

Thanks to the newly formed Sydney Campaigners Network for arranging the session. It was a great chance to hear directly from Daniel and to think more about the insights from his experience.

Thanks Anita for sharing your insights! This article was reposted from CanAct, 28/02/14.

For more, get yourself a copy of Daniel Hunter’s Strategy and Soul, and the companion Reader’s Guide. NSW folks, stay tuned for more Sydney Campaigners’ Network events.