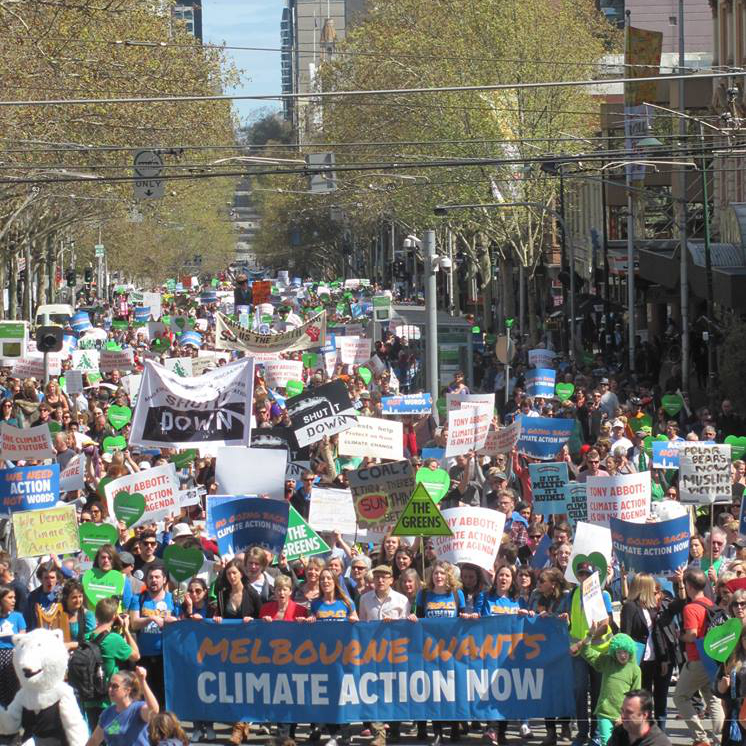 The international People’s Climate Mobilisation has involved inspiring large rallies around the world – including an epic 310,000 in New York City. In Melbourne around 30,000 turned out on Sunday 21 September, a beautiful spring day.

Four volunteers undertook a survey at the rally, to gather feedback for the organisers, see if there were lessons for future rally organisers, and inform discussions at the Graduate Certificate in Community Advocacy.

Unfortunately the number of volunteers available and logistical challenges (like internet connection) meant the sample size was smaller than intended – we spoke to 80 people in total. However, it was very interesting to talk with people and a good trial run which can built on at future mobilisations.

Please take these findings with a grain of salt due to the small sample size! The findings are provided for your interest but should not be taken as gospel.

How the survey respondents found out about the event:

The main organisation people heard about the event through was GetUp! (36.25%, 29 people) – predominantly via email, with a small number contacted by SMS. The next highest referrers were the Greens (11.25%, 9 people) and Avaaz (7.5%, 6 people). Other organisations people heard about the event from were ACF, Public Transport Not Traffic, AYCC, 350, Greenpeace, 1 Million Women, and Power Shop. Some people had been contacted by a number of different organisations.

In terms of what motivated people to attend the rally:

85% of people survey (68 people) had attended similar events in the past, while 15% (12 people) were attending for the first time. Anecdotally, a large proportion of these people seem to be motivated by frustration with the government, and attending with friends or partners seemed to be another factor. In future surveys it would be good to get indications of how often people had attended rallies, to look more closely at the experiences of newer participants.

Some of the actions people said they would like to be a part of to follow up this event:

Events like the People’s Climate March take significant work and resources to pull off. We should use them as learning experiences to inform future practice.

Many thanks to Naomi Blackburn, Jeff Tait and Emma Richardson for taking on this project with me (Holly Hammond).

Want to be part of future research projects? Or do you have a rally coming up that you’d like feedback on? Get in touch!