No Shortcuts to Building Power 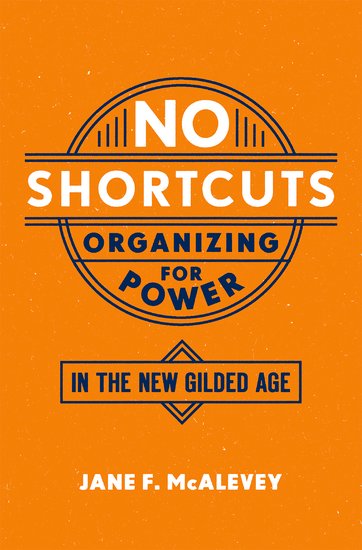 What’s on your summer reading list? Joel Dignam whets our appetites with this review of Jane McAlevey’s ‘No Shortcuts: Organising for Power in the Gilded Age’.

“Organising”, says Jane McAlevey, “is fundamentally about having hard conversations with people and not running away from hard issues.” Her latest book, No Shortcuts: Organizing for Power in the New Gilded Age, is true to this sentiment. In it, McAlevey outlines a critique of most contemporary union campaigning, using case studies and other analysis to argue in favour of a deeper and more rigorous approach to organising. While McAlevey’s experience and examples are primarily from a union context, her insights are highly transferrable.

McAlevey’s core argument is that movements that want to win real campaigns must adopt “a real, bottom-up organizing model.” What exactly that means is expanded upon through the rest of the text, with three particular themes emerging:

Each of these themes on its own has something to offer the reader; combined, they underpin McAlevey’s particular worldview and preferred approach to making change.

Organising is the targeted transfer of power

It seems that in the 21st century one can’t write an organising book without comparing organising and mobilising, and McAlevey clearly got the memo. No Shortcuts opens with a discussion of different approaches to change: advocacy, mobilising, and organising. What is novel in McAlevey’s approach is her inclusion of the idea of “theory of power” .

McAlevey argues that both the advocacy and mobilising models depend upon an “elite theory of power”. In this elite view, the movement/ the working class, doesn’t have meaningful power. Instead, it must operate within the existing power paradigm to try to gain influence. In this sense, while advocacy can win change from powerholders, it “doesn’t involve ordinary people in any real way” and “severely limits serious challenges to elite power.” While mobilizing is an improvement, because it “brings large numbers of people to the fight”, these people aren’t transformed — they “aren’t informed about [a power analysis] or the resulting strategy”. The mobilization is controlled by professional staffers who “see themselves, not ordinary people, as the key agents of change.” So, like advocacy, mobilizing can win change, but it doesn’t change power structures because ordinary people don’t have significant agency.

Hence, the fundamental difference with organising is its theory of power — that “the very idea of who holds power is itself contestable”. Organising doesn’t aim to persuade corporate elites to make concessions. Rather, “the primary goal is to transfer power from the elite to the majority.” This transfer of power is achieved not only through the goals of the organiser (such as the right to form a union), but through their methods themselves — “Ordinary people help make the power analysis, design the strategy, and achieve the outcome.” In this model, ordinary people aren’t a tool to be wielded by staff. Instead, they are the campaign: “They are essential and they know it.”

But what are the implications of this theory of power for how we organise?

There is power in a union

McAlevey just loves it when workers undertake a power-structure analysis. Worker ownership of the power analysis is crucial, because it allows workers to understand their own power: “people transition…to serious and highly invested actors exercising agency when they come to see, to understand, and to value the power of their own salient knowledge and networks.”

This power that people have is partly about resources like their community networks, but is fundamentally about the ability of workers to “withdraw their cooperation” and “sustain massive disruptions to the existing order.” An effective power analysis, then, will not only reveal situation-specific resources that workers may have. It will also, most importantly, involve workers in understanding “their contribution to the interdependent power equation” and the leverage that this gives them in any fight.

McAlevey certainly isn’t the first to realise that workers have power because elites depend upon their cooperation — in Gandhi as a Political Strategist, Gene Sharp points out that “hierarchical systems can be modified or destroyed by a withdrawal of submission, cooperation, and obedience”, and similar ideas are in Daniel Hunter’s Strategy and Soul or the teachings of Marshall Ganz. But McAlevey isn’t just saying that workers have power. Rather, she is extolling the value of involving workers themselves in this analytical work. In effect, bringing workers face-to-face with their own power serves to increase their power as well as their ability to analyse power. This capacity to analyse power then underpins effective campaign strategy.

So yes, workers have power. But it’s diffuse, it’s distributed. For that power to mean something, it needs to be organised. It needs to scale up. And that requires leaders.

Organic leaders — the key to scale

McAlevey argues that a movement needs serious power to win serious outcomes, and this power comes from engaging organic leaders who already have influence. This specifically contrasts with the approach taken by most NGOs, and many unions, who engage with people McAlevey calls “activists” who already support the cause but don’t necessarily have a following. Instead of taking the shortcut of working with activists (which might be sufficient for a mobilising approach and low concession costs), No Shortcuts suggests doing the deeper, harder work, of winning over organic leaders.

The reasoning for this is twofold. Firstly, building majority power in a “bounded constituency” (such as is required for a strike) makes it necessary to reach out to every person in that constituency, regardless of their “preexisting interest in the union”. Real power means a committed majority, and that can’t be achieved by only working with an activist minority that already supports the cause: “because the goal is building majorities of a bounded constituency, organizers are constantly forced to engage people who may begin with little or no initial interest in being a part of any group”.

Secondly, it’s worth taking the time to identify and win over “organic leaders” because they already have influence in a workplace. Rather than find people who are supportive and work to build their influence, you find people who are influential and work to build their support. McAlevey argues that developing these leaders is more valuable than training “random volunteers”, as they start “ with a base of followers”. “They”, she notes, “are the key to scale.” So, although organic leaders don’t necessarily support the union (or the cause), they are a natural target because they have influence in the constituency and will shape the views and behaviour of other constituents.

Is this concept relevant outside union organising? While it makes sense to speak of leaders in a workplace, or in a faith community, does it make sense to talk about leaders in civil society in the same way? Outside the shop floor, are there community member who are also organic leaders — who are influential, with a base of followers?

The answer, probably, is yes. But more importantly, the key distinction here is between activists who may display commitment and “leaders” who can move others to act. Recruiting activists is not the key to scale and, in fact, limits scale. If you are using resources to train and coordinate activists who are very supportive but can’t move others to act, you won’t be able to create the sort of distributed leadership structure that mean you can scale up the operation without saddling a few professional staff with an ever-growing workload. Being able to identify leaders, distinguish activists from leaders, win over leaders and develop them as necessary, is the key to building majority power — because leaders build your capacity to grow to scale.

In No Shortcuts: Organizing for Power in the Gilded Age, organiser Jane McAlevey endorses organising as an approach based upon a particular theory of power. In organising, each campaign is a chance not just to win an incremental improvement, but to shift the power equation — to engineer a transfer of power from the 1% to the collective majority. This transfer happens through involving workers in their own power-structure analysis, bringing them face-to-face with their resources and the significance of their ability to cause disruption. From there, organisers engage and win over organic leaders, “winning the debate about our future” to facilitate the scale needed to win majority support and achieve ambitious goals. McAlavey is writing primarily about the union as a means for this agency — but the lessons are applicable in any movement seeking to change the power equation.

“The 1 percent have a vast armory of material resources and political special forces,” writes Jane McAlevey, “but the 99 percent have an army.” No Shortcuts is a guide not only getting that army ready for the next battle, but for the war: the war not just for a better wage, but for meaningful agency in our lives and workplaces.

Joel Dignam is an organiser who reads and writes about how we can be better. This review was first published on Medium. Check out Joel’s other articles on Plan to Thrive and Medium plus the other book reviews on Plan to Win.