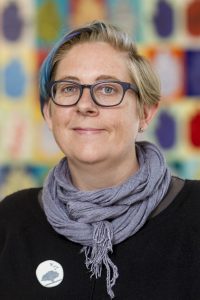 Holly Hammond is Plan to Win’s founder, director and principal facilitator and trainer. She is also the Director of the Commons Social Change Library.

Holly brings thirty years of experience in social movements to her work as an educator, facilitator and mentor. She is passionate about planning, developing coalitions, ending oppression, building community and assisting activists and community workers to lead balanced and rewarding lives.

Holly has been facilitating groups since she first became politically active at high school in the early 1990s. She has experience of activism in a number of social movements, including youth rights, women’s liberation, sex industry law reform, labour rights, peace and environmentalism. She has been employed in a diverse range of community based organisations in advocacy, publications, organising, policy, management and community development roles.

Since 2005 Holly’s work has been focused on supporting social movements. She ran a consultancy with this focus for many years, worked with the Change Agency 2006–2011, and established Plan to Win in August 2011. She has provided training and facilitation services for a broad range of Australian campaigning organisations, from small grassroots groups to large NGOs.

In June 2013 Holly travelled to Istanbul, Turkey to work on 350.org‘s Global Power Shift. She was part of the Training for Change team running the Training for Trainers prior to GPS and convened the Media and Communications workshop track throughout GPS. Holly also collaborated with New Tactics in Human Rights as a conversation leader in international online dialogues. She was a curriculum developer and teacher of the Graduate Certificate in Community Advocacy, a formal qualification in community organising and campaigning. Holly was the lead facilitator and retreat designer for the Women’s Environmental Leadership in Action program 2016-2018.

In addition to many years of learning-through-doing Holly has found the time to complete a BA in History and Politics, a Postgraduate Certificate in Public Policy, Certificate 4 in Training and Assessment, ‘Super T’ training of trainers by Training for Change (Toronto, 2006), SmartMeme’s Advanced Story-based Strategy Practitioner’s Training (California, 2011), ACTU’s Organising Foundations, Open Space Technology facilitation training, and Professional Supervision Training.

In July 2019 Holly co-convened the International Gathering of Activist Educators at the Ulex Centre in Catalunya.

Holly has worked with many cofacilitators, guest presenters, project leaders and trainees over the years who have extended Plan to Win’s work in important ways.